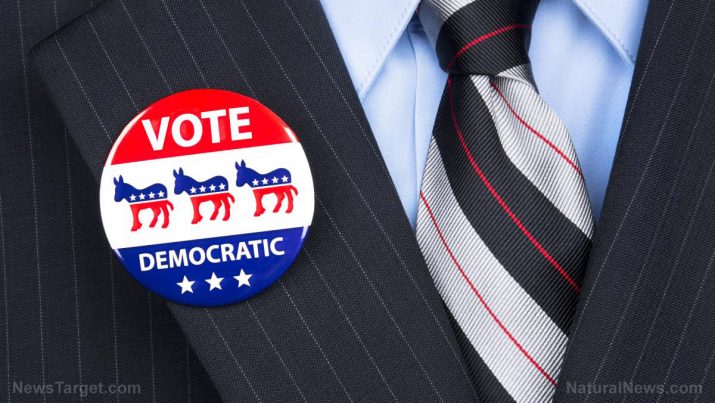 Of all the mistakes the Democratic party has made in the past ten years, endlessly accusing Donald Trump of colluding with the Russians during the 2016 presidential election has easily been one of their worst. Now, with the 2018 midterms less than six months away, the democrats have absolutely nothing to run on, other than opposing the president of the United States. They have no record. They have no real accomplishments. And as a result, they are getting desperate.

Dave Hodges of The Common Sense Show recently made this same argument, and explained that the democrat party is particularly dangerous when it feels as though its being backed against a wall. “A broke Democratic party is a desperate Democratic party that will do almost anything and everything to win an election,” Hodges writes.

He later added, “The Democratic party cannot win back the control of the government. Therefore, their Deep State partners cannot bring down the American government. CALEXIT is failing. The Democrats are broke. Therefore, their only solution is to evoke massive false flag events in this country and pray that the United Nations will militarily assert itself through the Kigali Principles.” (Related: The defeated left turns to hate as liberals unleash beatings, death threats and calls for mass murder of Trump supporters.)

In other words, while it is an absolute fact that the democrats have nothing significant to run on in the weeks and months leading up to the 2018 midterm election, this does not mean that we, as conservatives, should view them as benign and harmless. On the contrary, we need to recognize that the democrats are desperately trying to keep their party alive and cling on to their diminishing power for as long as possible. And the more desperate they become, the more likely it is that they will lash out. (Related: According to the new liberal philosophy, hatred is now tolerance.)

In fact, one could make the argument that this born-from-desperation type of viciousness has already begun. In most cases, it has come in the form of vile and even unprecedented attacks on the President, like when the democrats walked in lockstep with one another to accuse Donald Trump of saying that all illegal immigrants are animals. One headline from USA Today read, “Trump Ramps Up Rhetoric on Undocumented Immigrants: ‘These Aren’t People. These Are Animals.’” A headline in the New York Times read, “Trump Calls Some Unauthorized Immigrants ‘Animals’ in Rant,” and the far left Huffington Post decided to go with, “Trump Calls Some Undocumented Immigrants ‘Animals.’”

Obviously, the liberal media was attempting to make Donald Trump look like a xenophobic bigot that believes every single man, woman and child that crosses into this country illegally is sub-human. The only problem is that in his so-called “rant,” as the New York Times put it, this isn’t at all what he said. All one has to do is look at the context of the discussion that took place to know that Trump was referring to the vicious, unrelenting gang MS-13 when he made his comment, not all undocumented immigrants as the liberal media asserted.

This, of course, is just one of many examples of the left’s viciousness and hostility in the months leading up to the midterm elections. They have nothing substantial to run on, so instead they resort to lies, deception, false flags and unprecedented political attacks in one last ditch effort to hold on to what little power they have left. As we get closer to November, conservatives should expect things to get much worse. They need to remain on guard, equipped with the mental stamina and intellect necessary to counter the left’s desperate yet dangerous final stand.