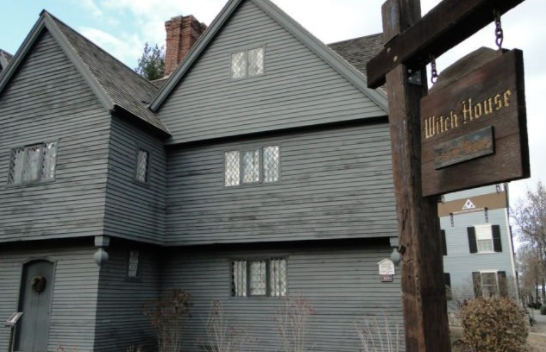 Back in January of 1692, two young girls living in Salem Village, Massachusetts, 11-year-old Abigail Williams and 9-year-old Elizabeth Parris, began acting as though they had lost all control of their bodies. After this lack of control eventually escalated to violent contortions and uncontrollable outbursts of screaming, the girls were taken to a local doctor by the name of William Griggs, who diagnosed Abigail and Elizabeth with bewitchment. Shortly thereafter, other young girls began to exhibit similar symptoms, such as Ann Putnam Jr., Mercy Lewis, Elizabeth Hubbard, Mary Walcott and Mary Warren.

A wave of hysteria spread throughout Salem, and a special court was established to hear the cases of those being accused of witchcraft. Bridget Bishop was the first to be convicted and was hanged in June of 1692, and over the next several months, 150 more men, women and children were also accused of witchcraft. The hysteria finally began to subside in September, but by that point, the 8-month-long witch hunt had made its mark on history, and would forever be known as the Salem Witch Trials.

Today, looking back on the Salem Witch Trials, it seems silly that anyone could ever witness an individual have an emotional outburst and then accuse him or her of witchcraft – this simply doesn’t make any sense. There had to have been a logical reason as to why many members of the Salem community were acting in the way that they were, and chances are, that reason had more to do with science and biology than anything else. Perhaps it was some kind of unknown disease that was being spread around the community, or maybe the food or water supplies were contaminated. Whatever the reason, it’s safe to conclude that witchcraft likely wasn’t to blame for the strange behaviors of the people of Salem in 1692.

But then again, fear and hysteria are both extremely powerful things that can cause people to act irrationally and utterly illogical. This is a phenomenon that still exists today, even more than three-hundred years after the Salem Witch Trials.

Take mass shootings, for instance. Whenever a crazed gunman enters a school or some other public institution and opens fire on innocent people, the very first thing that the political left wants to talk about is gun control. Even before the country has a chance to mourn and pray for those who lost their lives, the liberals are already insisting that we need to “do something” to “ensure that this never happens again,” even though completely eliminating gun violence in any society is downright impossible. Incidentally, the left’s solution to mass shootings is almost always more laws and regulations (caps on magazine sizes, banning bump stocks, banning the AR-15, etc.). It really is a knee-jerk reaction – the more instances of gun violence there are, the more the liberals push for bigger government.

Here’s the problem: More gun control does not correlate with less crime. It may be easy to get caught up in the hysteria and buy into the idea that making harder to obtain firearms will ultimately deter firearm-related crime, but this has never been the case. As a matter of fact, as Breitbart News reported back in 2016, when more people are able to easily access firearms for personal self-defense, crime drops significantly. (Related: 98% of all mass shootings target gun free zones created by liberals.)

“Gun ownership has nearly doubled since 1993, yet in the 23 years between then and now, the Bureau of Justice Statistics shows that violent crime has fallen 77 percent,” Breitbart reported. “We are not talking about a slight increase in gun ownership. Rather, we are talking about gun ownership surging to the point that the 192 million guns Americans owned in 1994 are approximately 350 million or more guns today. And violent crime decreased sharply.”

If the liberal narrative were true – that fewer guns leads to less crime and more guns leads to more crime – then how could it be that between 1993 and 2016, violent crime decreased by 77 percent while gun ownership nearly doubled? This is just one example of how the liberals are completely disconnected from reality and choose to handle certain situations irrationally rather than through applied logic and reason.

It’s worth noting that the way in which liberals specifically target their conservative counterpart and accuse them of everything from being mentally ill to flat-out evil is also similar to the Salem Witch Trials. Last February, for example, liberal “scientist” Bill Nye claimed that those that don’t believe human beings are contributing to global warming suffer from a psychological problem: “To the deniers out there. I want you to think about what is called cognitive dissonance,” Nye said, referring to situations where people choose to look the other way instead of accepting reality.

While the Salem witch trials may have come to an end over three centuries ago, the way in which today’s conservatives are targeted and accused of the unthinkable suggests that history may very well be repeating itself. Conservatives aren’t being put to death, of course, but they are being treated as mentally unstable outcasts. Ironically, it’s the conservatives that are doing everything they can to keep our society rooted in facts, logic and rationality.

Follow more news about the insanity and delusion of the unhinged Left by reading LeftCult.com.