Does the civil war begin on November 4? “Refuse Fascism” to radically escalate left-wing battle tactics in bid to overthrow the country 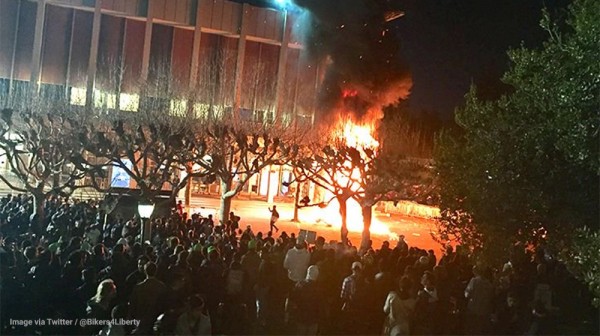 Radical leftist groups have threatened to greatly escalate their counter-protest tactics after descending on Charlottesville, Virginia, recently to engage in violence against a group of peaceful protesters who were there to speak up about the removal of a historical statue. The so-called anti-fascist group “antifa” says it plans to become even more violent in the coming months to fight back against the encroachment of what they claim to be “alt-right” and other “racist” groups who believe something different than antifa.

Angry that Americans of all political persuasions, not just leftists, are free to make their voices heard in public without fear of retribution, antifa hopes to fill this liberty void with its own brand of authoritarian fascism. Using the alleged car crash incident in Charlottesville to claim that anyone who’s not antifa is a violent killer, antifa plans to generate violence as a remedy to the violence it claims its opponents are creating. Peace through war, in other words.

“Charlottesville is just the beginning,” reads an ominous poster created by the anarchist group CrimethInc., a self-described “international network of aspiring revolutionaries” that aligns itself with the antifa terrorist group. “If the alt-right can get away with murder there, none of us will be safe. We have to stand up to white supremacists, we have to shut down and chase out these bigots every time they try to organize, or else they will kill more people.”

Throwing in a jab against police while they were at it, the CrimethInc. poster adds that because the police “will not protect” them that they must organize to “defend themselves.”

“They murder over a thousand people every year in this country, and infiltrate and attack our demonstrations when we stand up against alt-right terror,” the group CrimethInc. added.

Though many of the details as to what actually occurred in Charlottesville the day of the incident remain highly dubious, the narrative carries on regardless. And the next chapter apparently involves bands of street fighters that not only march on historical sites to commit violent acts against peaceful protesters, but also conspire to deconstruct the American political system that’s allegedly responsible for allowing people who aren’t antifa to participate in civil society.

Taking part of the blame is American capitalism, which antifa says is a product of “white supremacy and American imperialism” – ironic, considering that capitalism is a critical part of the system that allows groups like antifa to protest in the first place.

“The American state is collapsing,” reads a statement by Revolutionary Abolition Movement, another anarchist group. “As capitalism remains mired in crisis, its once solid position within the global order is crumbling. With ever widening cracks in the state’s foundations, those who reaped the benefits of white supremacist society and American imperialism are grasping at any last chance to maintain their position in the hierarchy it legitimates.”

Antifa just can’t allow things like American exceptionalism or our Constitutional Republic to get in the way of its agenda to destroy “far-right violence,” a.k.a. peaceful protests by non-antifa American patriots. So antifa is resorting to the only thing it knows how to do in response to differing opinions or beliefs: the threat of bloodshed.

What’s incredibly ironic about the way that antifa lays out its newest tactical maneuvers to seize control over American society is that almost everything it blames on the “alt-right” is exactly what it’s doing to supposedly counter the “alt-right.” Antifa claims to be anti-fascist, for instance, when its efforts to silence free speech are the very definition of fascism. Antifa also claims to be the victim or bigotry and hatred when, in fact, antifa is the instigator in almost every instance.