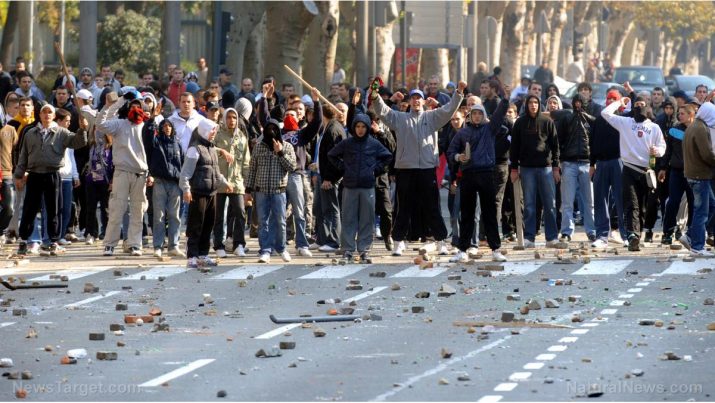 As they so often do, far-Left Democrats have overplayed their hand and created a monster that later threatens to destroy them — in this case, the band of violent thugs known loosely as “Antifa.”

For months Democrats have ignored the violence this group has visited upon Trump supporters, Republicans in general and conservatives. Some have even cheered it and, in recent weeks, others have even attempted to defend it as political violence that’s “okay” because Antifa thugs claim to be against facism — even though they’re using fascist tactics (violence) to demonstrate it.

But now, as Antifa’s far-Left anger began to be directed at legitimate and traditional American ideals like freedom of speech and capitalism, Democrats are getting nervous they could be punished (again) at the polls in 2018, as the narrative shifts away from their earlier narrative that President Donald J. Trump and his supporters are the violent ones.

As reported by Zero Hedge, the traditionally Democrat-leaning “mainstream” media seems to have turned against Antifa after one of its own, a Bay-area TV news personality, posted a truthful, honest, and revealing encounter with Antifa thugs last weekend near Berkeley on his Facebook page.

“I experienced hate first-hand today… It came from these people dressed in all black at a protest in Berkeley,” Frank Somerville wrote. “Ironically they were all chanting about NO hate. Some had shields and gloves. Some had helmets. Some had gas masks.”

After snapping a few pics of the Antifa thugs who were gathering in expectation of violently shutting down yet another free speech event — which didn’t take place because the event organizer canceled over fears of violence — Somerville found himself being confronted by some of them.

“In my opinion, these people dressed in black are just as hateful and intolerant as the people they are protesting against,” he wrote.

Shortly thereafter, some of the mainstream media players were getting into the anti-Antifa act. The Washington Post actually ran a story on the Berkeley protests under this headline: “Black-clad antics members attack peaceful right-wing demonstrators in Berkeley.”

And the Los Angeles Times reported under this headline: “‘Antifa’ violence in Berkeley becomes a problem for left-wing activist community.”

Then, The Atlantic, which is about as Left-wing as publications get, published a story under the following headline: “The Rise of the Violent Left.”

The subheading read: “Antifa’s activists say they’re battling burgeoning authoritarianism on the American right. Are they fueling it instead?”

Then liberal Bloomberg reports: “A Modest Proposal for America’s Fascists and Anti-Fascists: The masked ‘antifa’ anarchists have more in common with the Tiki-torch Nazis than with American ideals.”

Wow. What a role reversal from just a few weeks ago, when outlets like CNN were praising Antifa or, at least, attempting to legitimize the violence they have been using to shut down free speech on college campuses and at Trump rallies for months.

The Bloomberg piece, authored by Eli Lake, a noted and respected national security correspondent, made a great recommendation, by the way:

As America feels like it’s coming apart at the seams, I have a modest proposal. The hard-right and hard-left activists who so enjoy protesting one another should meet every few weekends in a large national park and have at it.

The rest of us could begin to treat this wave of street agitation as the sideshow it is.

After all, this is not a fight for the soul of America. Neither the Tiki-torch Nazis nor the masked anarchists represent a viable American future. They are simply engaging in nostalgia, a scarier version of Civil War battle re-enactments.

What’s most notable about these frank and honest descriptions is that they are also not-so-veiled admissions that President Trump was right: Both sides were responsible for the deadly violence at Charlottesville. (Related: Trump schools dishonest establishment media as he doubles down on initial claim that “both sides” share blame for Charlottesville.)

More than that, though, the Democratic Party-aligned media appears to be sending a signal to its elected leaders: Hitching their wagons to Antifa is a political loser, so don’t do it.