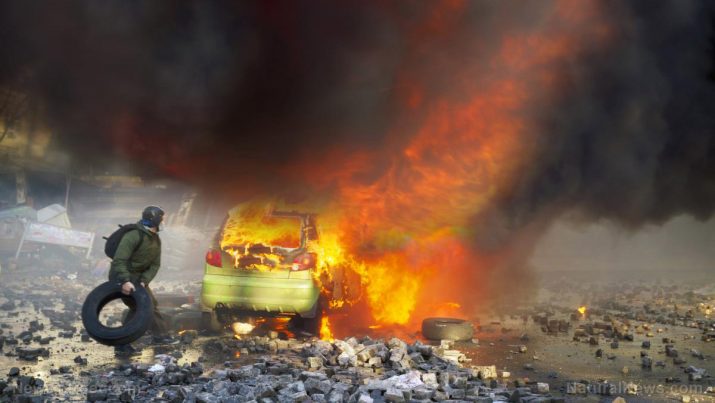 A much needed White House petition to officially recognize Antifa as a terrorist organization has reached 100,000 signatures, shedding some light on how the American people really feel about the radical group that claims to be taking a stand against fascism.

The petition, which was created on August 17, 2017 in response to the events in Charlottesville by an individual with the initials “M.A.,” calls on the United States government to officially label the radical left wing Antifa movement as a terrorist organization.

“Terrorism is defined as ‘the use of violence and intimidation in pursuit of political aims,’” the White House petition states. “This definition is the same definition used to declare ISIS and other groups, as terrorist organizations. Antifa has earned this title due to its violent actions in multiple cities and their influence in the killings of multiple police officers throughout the United States.”

The petition goes on to say, “It is time for the pentagon to be consistent in its actions – and just as they rightfully declared ISIS a terror group, they must declare Antifa a terror group – on the grounds of principle, integrity, morality, and safety.”

Considering the violent and extreme nature of the Antifa movement, it absolutely makes sense to officially recognize this group as a terrorist organization. As the petition points out, to sweep the actions of Antifa under the rug and refuse to label it as a terrorist organization would be inconsistent and incredibly disappointing on the part of the Pentagon. If the Islamic State is recognized as a terrorist organization for using violence and intimidation to achieve its goals, then so too should Antifa for doing virtually the same exact thing. (Related: March on Google postponed after Antifa threatens to ram cars into peaceful protesters.)

Not long after President Trump’s rally in Phoenix, Arizona on Tuesday, Antifa rioters took to the streets and began chanting, throwing water bottles at police, and inciting violence. In one video clip posted on Twitter, an Antifa activist is seen standing on some kind of structure with his arms in the air as if celebrating the fact that he was standing in the middle of chaos. Other video clips depict Antifa members marching through the streets wearing masks and dark sunglasses, presumably to hide their identities.

After being told by police to disperse but refusing to do so, law enforcement was ultimately forced to fire rubber bullets and tear gas in an attempt to regain control of the Phoenix streets.

Shockingly, a CNN headline appeared to blame not the Antifa protesters for all of this chaos, but President Trump: “Protests in streets after Trump’s angry, divisive speech,” it read. Truth be told, it’s really not all that surprising that the fake news network CNN would cast the blame on the president, but it’s still very telling nonetheless. (Related: Now Yahoo News endorses Antifa terrorist organization with a glowing review.)

There is something incredibly ironic about demonstrating hatred and intolerance while protesting against the so-called “hatred and violence” coming from President Trump. Every single time that Antifa is in the news for creating chaos or inciting violence, they are in essence putting their hypocrisy on full display. How dare these cowards lecture President Trump and his supporters on the importance of being compassionate and accepting of everybody, while they themselves don’t even practice what they preach.

It is time to officially recognize the Antifa movement as a terrorist organization. What took place in Phoenix earlier this week is just one example out of dozens that demonstrates just how dangerous and threatening the group really is. They are without a doubt using fear and intimidation in order to get what they want, and as such, it is our duty as a people to give them the proper title that they deserve.